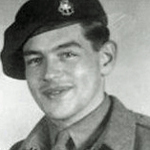 Colin Anson served in 3 troop, also known as 'X' troop. Enlisting in his real name of Claus Leopold Octavio Ascher he first joined the 87th Company of the Pioneer Corps (for Aliens).

On volunteering for the Commandos and due to the fact that he was a refugee from Germany, he was required to decide on a new name to protect him in case of capture. He chose Colin Edward Anson (see comments below) and he chose to keep this as his name for the remainder of his life. His parent Regiment was now the Royal Sussex, and he began his training at the Commando Basic Training Centre.

The Commandos of 3 troop were all German speaking refugees. They  were posted to different Commando units as and when needed, their language skills, combined with thier Commando training,  being highly sought after. They never operated as an entire troop.

Colin was severely injured on the 17th July 1943 during an air raid whilst on board the Queen Emma, having taken part in the Sicily landings the previous week attached to 40RM Commando.

After life saving surgery and a lengthy recovery period, Colin returned and re-joined the Commandos in Southern Italy then onto Yugoslavia. He worked in the Intelligence Section of 2 Commando Brigade. He later operated with the Commandos on the Island of Vis, Corfu, and Albania , subsequently returning to Italy.

Promoted Staff Sergeant post war Colin served as an interpreter with the Control Commission Germany (CCG). This is a very brief outline of Colin's service. Fuller details can be found on this link to  a Speech he gave in 2007 , and in a book about his life written by Helen Fry entitled " German schoolboy, British Commando. "

In a telephone conversation with Colin I once asked him how he chose the last name Anson. He told me that when asked to provide another name he happenned to look out the window and saw an RAF Avro Anson flying past. So he chose Anson.