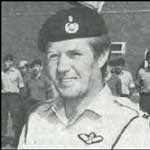 In 1982 Major Cameron was the Officer Commanding 3 Commando Brigade Air Squadron. He was awarded the Military Cross for gallant and distinguished service during operations on the Falkland Islands [1][2].
Citation
"Major Cameron is the Commanding Officer of 3 Commando Brigade Air Squadron. From the first day of operations his Squadron of Gazelle and Scout helicopters rendered outstanding service in support of the Brigade, often flying in appalling weather conditions by day and night, having to evade Argentine fighters and anti-aircraft fire.
During these operations three helicopters were shot down with the loss of four lives. Nonetheless, the Squadron continued to provide extremely valuable support to the ground forces, ferrying urgently needed ammunition and evacuating wounded during the battle for Darwin and Goose Green amongst other actions.
Throughout this most demanding period, Major Cameron led his Squadron with humour and compassion both on the ground and in the air. His fine example of courage and determination, in the face of severe losses, was an inspiration to all and his leadership ensured that no call for help went unanswered " [2].
Source
[1] London Gazette 49194, page 16123.
[2] London Gazette 49134, page 12837.
[Image] Globe and Laurel Sept/Oct. 1982.
Archive pages :
RM Commandos 1946 - present
3 Cdo. Bde. Air Sqn / Helicopter Force
Falklands