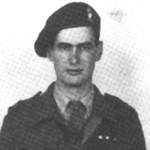 Lieutenant Ambrose McGonigal was awarded the M.C. [1] for distinguished service during a raid on the enemy held island of Sark on the night of the 27th December 1943. This was a reconnaissance operation to obtain certain information and if possible capture a prisoner. Very soon after landing the raiding party inadvertently entered a minefield and the resultant explosions killed one member of the party and badly injured a second. Whilst evacuating from the minefield a further 4 mines exploded killing the already injured man, and wounding Lt. McGonigal and 2 others. Ignoring his own injuries he led his men to the beach and organised the evacuation by the Dorys to the waiting M.T.B. [2].[see notes].
He was later awarded a bar to the Military Cross [3].
Citation
This officer was the commander of a military force which landed to the East of Calais on the North coast of France on the night of 16/17 May 1944, to carry out a reconnaisance of enemy beach obstacles The operation was of the highest importance and was of an extremely hazardous nature, involving as it did a three mile approach to a heavily defended enemy coastline, by night in an 18 foot Dory, and the carrying out of a minute examination of beach mines and obstacles of unknown potentialities.
During the run in, and the return passage to the parent M.T.B., Lt. McGonigal was forced to alter course on two occasions to avoid a single enemy vessel and a convoy of seven vessels proceeding towards Calais a mile offshore. Despite such interference he so navigated his craft as to reach the selected landing point without error thus greatly facilitating the task of the landing party. Throughout the entire operation his skill, courage, and level headedness inspired his force to the maximum of effort and resulted in the obtaining of vital information [4].
He also received a Mention in Despatches  in recognition of gallant and distinguished services in the Mediterranean Theatre [5]. This was during operations in the Aegean with the Special Boat Service [7].
Post war he served in the Special Air Service Regiment (SBS)  and was granted the honorary rank of Major in 1952 [6].
In 1956 after studying law he became a Queen's Counsel. On 28 May 1975 he was promoted to the court of appeal in Northern Ireland as a lord justice of appeal, and shortly afterwards was knighted and sworn of the privy council [7].
The death of Major Sir Ambrose McGonigal, MC. (12 Cdo & SBS) of Downpatrick. Co. Down. N. lreland, was announced in Commando Association newsletter 70 issued March 1980. [8].
Sources
[1] London Gazettes Supp. 36403, page 1042.
[2] National Archives file WO 373/94/287.
[3] London Gazettes Supp. 36637, page 3605.
[4] National Archives file WO 373/95/789.
[5] London Gazettes Supp. 37575, page 2468.
[6] London Gazettes Supp. 39444, page 445.
[7] Dictionary of Irish Biography, Cambridge University Press (Royal Irish Academy) website.
[8] CA Newsletter 70.
Notes
Archive pages :
No 12 Commando
Holding Operational Commando
Special Boat Section/Squadron/Service