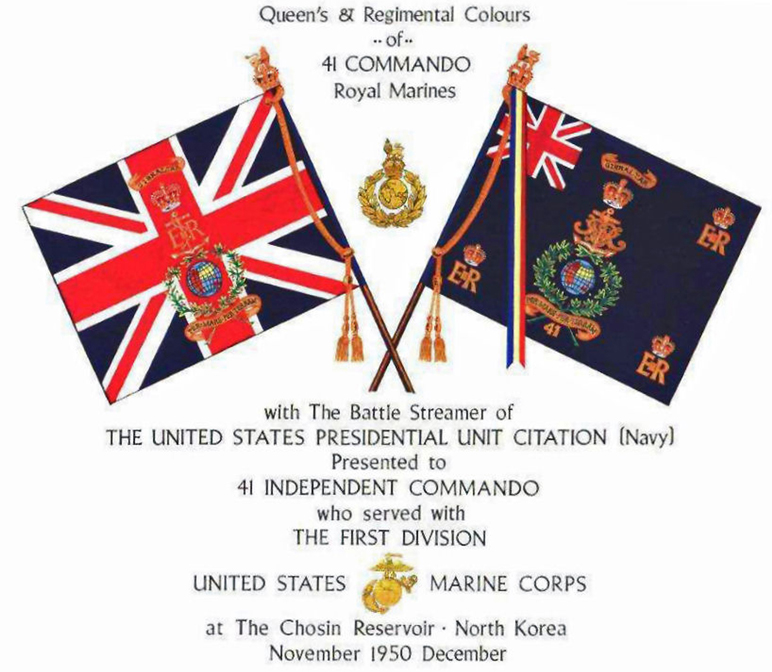 In October 1942 the 8th RM Battalion was disbanded and those who volunteered for, and passed the training, formed a new 41RM Commando.  The Commando saw service in WW2 at Sicily and Salerno, Normandy and Walcheren, and the advance through Holland into West Germany. At the end of the war 41 RM Commando was disbanded.

In August 1950 a new 41 Independent Commando was formed at Bickleigh specifically for the war in Korea.  It was completely equipped by United States forces on its arrival in Japan and was commanded by Lieut. Col. D.B. Drysdale DSO, OBE, RM, [view] in the first instance, and later by Lieut. Col. F.N. Grant RM.

During its service in Korea the Commando carried out a number of successful amphibious raids on the Korean coastline, chiefly with the object of destroying the coastal communications. At the same time it succeeded in tying up large Communist forces in coastal defence. When the Chinese entered the war the Commando was attached to the 1st US Marine Division USMC, and it took part with this Division in the historic breakout from the Chosin Reservoir in December 1950.

Less than 18 months after it was formed this now famous Commando was disbanded on 22nd February 1952. Some of the men were transferred to the 3rd Commando Brigade in Malaya, ten officers and a hundred-and-thirty men returned home in the Empire Orwell *.

In 1957 it was awarded a United States Presidential Unit Citation for services with the 1st Division United States Marine Corps seven years earlier at the Chosin Reservoir,  North Korea.

In 1960 41 Commando RM was reformed and saw service in Northern Ireland and with the UN Forces in Cyprus until it was again disbanded in 1980.

The Commando Roll of Honour for Korea [View here]