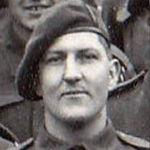 Fusilier Wyndam Davies, 6 troop, was killed in action at Dragone Hill, Salerno, Italy. Initially buried as far as is known by the 6th Yorks and Lancs Regiment on the forward slope of the hill.
Son of Francis and Mary Ann Davies, of Port Talbot, Glamorgan.
Volunteered for the Commandos as part of the Police Intakes of 1942.
Wyndham Francis Davies, warrant number 127039, joined the Metropolitan Police on 11 July 1938, and left on 13 Sept 1943 (died). Last posted to M Division as a PC.
Sources
[1] CWGC.
[2] Casualty Lists / National Archives file WO417/68.
[3] No.2 Commando Casualties Salerno document below.
[4] Register of leavers from the Metropolitan Police / National Archives file MEPO 4/350/230.
Notes
First name spelt as WYNDAM on source [1]; WYNDHAM on transcript of source [4].
Primary Roll of Honour:
'2 Cdo. Roll of Honour'
Linked content:
2 Commando Salerno/Scaletta Casualties
Photo of Commando in Gallery:
Yes
Photo of grave in Gallery:
Yes
Archive pages :
No 2 Commando