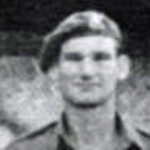 Corporal William James Keery G.M. served in No.1 Commando. A serving Metropolitan Police Officer he volunteered for the Commandos as part of one of the Police Intakes. Whilst serving as a Constable, aged 25yrs, he was awarded the George Medal for rescuing 7 persons trapped in a cellar at Queens Buildings Scovell Road at Lambeth, London, 15 October 1940.
Citation
A very heavy bomb demolished a large part of a block of dwellings, causing many casualties. P.C. Keery attended with other Police Officers. Cries were heard from a cellar and a small opening was found, blocked by debris and some heavy iron railings.
With some difficulty this was partly cleared and a hole just large enough to admit a man was made. Unhesitatingly Keery dropped into the cellar through this hole and, making his way through fallen beams and masonry, succeeded in bringing out, first a badly wounded man, then three children, one woman and two more men.
The P.C. showed extreme coolness and courage and worked regardless of danger to himself. The whole building was liable to collapse and the enemy were continuously overhead. Immediately after this very fine effort, the P.C. applied himself to further rescue work and was unsparing in his efforts to render aid to the trapped occupants of the buildings.
Sources
London Gazette 35058, page 609.
National Archives file HO 250/8/296.
Notes
Photo of Commando in Gallery:
Yes
Archive pages :
No 1 Commando