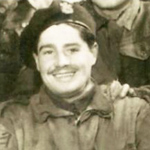 Lance Corporal Vincent Osborne, 3 Troop, a veteran of the Dieppe raid, was awarded the Military Medal in recognition of gallant and distinguished service in Normandy, France.
Award presented at L'écarde quarry, Amfreville on the 16th July 1944 [view].
Recommendation
On 6 June 1944 in the attack on Le Plein, this man showed exceptional courage and devotion to duty when he continued to engage the enemy in the open to enable the wounded, including his Troop Commander, to be evacuated. He immediately killed the German who had wounded his Troop Commander. He later showed great bravery and initiative in the second and successful attack. [Recommended for DCM, awarded MM].
Sources
London Gazette 36679, page 4049.
Award Recommendations / National Archives file WO373/48/381.
Daily Telegraph Obituary
Jennie Barlow / Malayan Police Association.
Commando Association newsletters 10 & 11 (1950), 14 (1952), 100 (1995), 108 (1999).
Linked content:
Dieppe - Operation Jubilee
Normandy - Operation Overlord
Photo of Commando in Gallery:
Yes
Archive pages :
No 3 Commando
Malaysia and Brunei