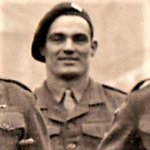 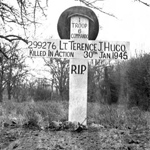 Lieutenant Terence Hugo, 1 troop, was reported wounded and missing, later confirmed killed in action, during operations in Holland [1][1a]. At the time of his death his Commando were engaged in operations in the area of Heide Wood near Brachterbeek [2].
Extract from the Carluke and Lanark Gazette
"Lieut.Terence J. Hugo, younger son of Mrs Hugo, Mousebank Road, Lanark, and of Capt. J.W. Hugo, Lanarkshire Yeomanry, has been reported wounded and missing in Western Europe. Lieut. Hugo was educated at Lanark Grammar Secondary School and went straight from school to the Army six months before the outbreak of war.
An outstanding sportsman, he gained rapid promotion in the army physical training staff and soon gained the rank of sergeant major. He did a considerable amount of work in training Commandos and Paratroops before being commissioned.
He went to Normandy on D Day and was home for a short leave at Christmas.
His father, Capt. Hugo, served in the last war and was an instructor with the Lanarkshire Yeomanry before being granted a commission. He is a prisoner of war in the Far East. Lieut. Hugo, who was serving with a Commando unit, has an elder brother also in the army." [3].
Sources
[1] CWGC.
[1a] Casualty Lists / National Archives files WO417/8 (x2 entries)
[2] 1 Cdo. Bde. HQ War Diary January 1945.
[3] Report  in the Carluke and Lanark Gazette 23 February 1945.
[4] London Gazette 36313, page 82.
[Image] CVA Gallery photo of No.6 Commando Officers.
Notes
The service number of 229276 shown on the CWGC main page differs with that of 299276 on their own grave registration reports as well as on the London Gazette entry at [4] above and both of the entries in Casualty Lists at [1a] above. Email sent to CWGC 27Feb.2022.
Primary Roll of Honour:
6 Cdo. Roll of Honour
Linked content:
1 Cdo Bde HQ War Diary Jan-Mar 1945
Normandy - Operation Overlord
Photo of Commando in Gallery:
Yes
Photo of grave in Gallery:
Yes
Archive pages :
No 6 Commando
Commando Training