BISSELL, SSgt. Transcript of a speech. 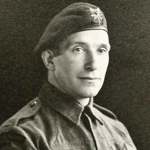 Stanley Bissell joined the Metropolitan Police on the 1st March 1926. In 1930 & 1934 he won silver medal at the British Empire Games middleweight freestyle wrestling events in Canada and London. He was then posted as self defence instructor at the Metropolitan Police Training Centre at Peel House. He attended the Army School of Physical Training to assist him in this new Police role.

During WW2 he volunteered to be part of the new Police intakes into the Commandos and in 1942 was sent to the Commando Basic Training Centre at Achnacarry. After completing his Commando training the Commandant of the CBTC, Lt Col Charles Vaughan, recognising the potential in Stanley Bissell, immediately transferred him onto the Staff at the CBTC where he joined CSMI Frickleton as an Instructor on the Physical Training team. His role involved many aspects of training in physical fitness and included methods and techniques of Close Combat. Sgt Stanley ' Sonnie ' Bissell played a pivotal role in this training until the end of the war, making the Commandos fit to fight, and instilling in them the qualities that are to this day still recognised and respected worldwide.

In his spare time he also ran 3 youth clubs, and was a member of both the Orion Gymnastic Club and the Herne Hill Harriers. Stanley Bissell rejoined the Metroplitan Police at the end of the war serving as an Inspector in charge of Physical Training at the Recruit Training Centre. In 1953 he was awarded the British Empire Medal in the Coronation Honours. He retired from the Police in 1955 but would return 5 years later after a brief spell in Canada to take up the post of Director of Physical Training at the new Metropolitan Police Cadet Corps.

nb. The nickname "Sonnie" was given to him by his sister Leah. He was known as Sonnie by family and friends, and "Stan" by work colleagues.

There are more photos in our gallery.

Follow this link to read more on Commando Training History