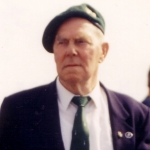 Corporal Sidney Meddings was wounded during operations in Western Europe (Flushing Holland).
A serving Metropolitan Police Officer he volunteered for the Commandos as part of the Police Intakes. In 1939 he was a Police Constable residing at 16 Sherrard Road, Manor Park. Post war member of the Commando Association.
Obituary by Henry Brown OBE
"It is with very deep regret that the death of Sidney William Meddings (4 Cdo) in December last is announced. As a member of the Association's General Committee over the last few years, many comrades will recall what a tremendous worker he was in our cause.
His interest and enthusiasm in all our meetings and activities was of the highest order and he will be greatly missed. Single handedly he inaugurated the Lincoln branch and turned it into one of the most active branches of our organisation.
Deepest sympathy goes out to Elsie his widow, who at all times gave such solid support. "
Sources
The 1939 Register.
Reunion and troop images in gallery.
Casualty Lists / National Archives file  WO417/85.
Obituary in Commando Association newsletter 108 issued March 1999.
[Image] Stephane St Martin.
Notes
Rank shown in CasList is War Substantive Corporal. Rank shown in CA Newsletter 108 is Sergeant.
Linked content:
'Operation Infatuate'
Photo of Commando in Gallery:
Yes
Archive pages :
No 4 Commando