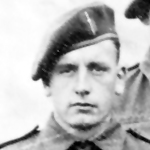 Sergeant William Rudge, 5 troop, was awarded the Distinguished Conduct Medal for "gallant and distinguished services in Italy" [1].
Citation
Gulf of Salerno 13 Sept. 1943.
On the 13th September 1943 on the Dragone Hill, Sgt. Rudge, one of the six survivors of the foward section of 22, showed outstanding bravery whilst in close contact with the enemy. After being mortarted and shelled for two and a half hours, and during a period of close confused fighting, he twice rallied the men near him and repeatedly drove off the enemy. He also organised a party to go forward under enemy machine gun fire, to retrieve a Vickers gun (whose crew were all casualties.) The gun was used afterwards and inflicted casualties. Sgt. Rudge carried back on three separate occasions badly wounded men, always returning immediately to the firing line, and his behaviour under a most severe concentration of mortar and M.G. fire for a period of about three hours was an inspiration to the Section [2].
Earlier in 1941 he took part in intelligence gathering operations from Malta.  Landing from submarines of the 10th submarine flotilla utilising folbots to gather information and be picked up later. The IWM hold a recording of an interview with him (available to listen to via their website)  where he describes this and other actions [3].
Sources
[1] London Gazette 36327, page 256.
[2] National Archives file WO 373/4/94.
[3] IWM recorded interview with Sgt Rudge DCM ref IWM Sound Dept., catalogue no 10046.
Linked content:
'Malta detachment - Force X'
Photo of Commando in Gallery:
Yes
Archive pages :
No 2 Commando