War Diaries of No 1 Cdo.  ref.  National Archives WO 203/ 1792. Transcribed with the help of  John Mewett and Elaine Southworth-Davies from a copy typed on a ribbon type writer which was very hard to decipher.  ***** refers to a word that could not be made out.

Report by Lt. Col Peter Young on the Battle of Hill 170 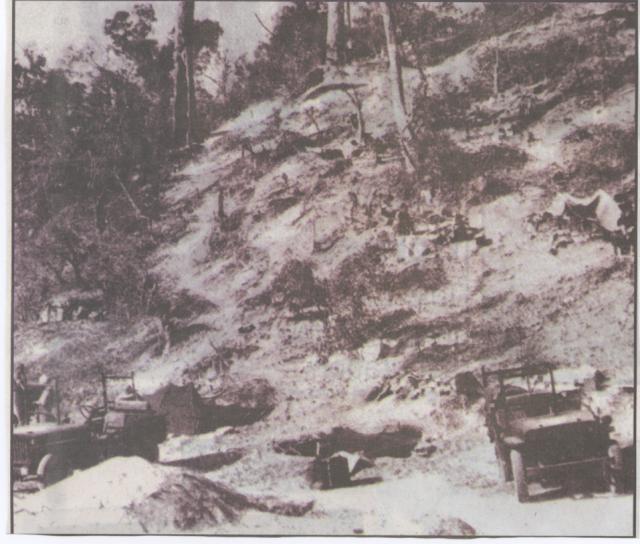 The Japanese indulged in a fairly prolonged barrage which didn’t compare to badly with a Bosche effort. This was followed by musketry from the N end of 170. I got up and got dressed and went along to see Lt Col Trevor and found him in his HQ. It was daylight when we arrived. On the way I told various sections I passed what information I had gathered from Bde.HQ. This was to the effect that a party of about 20 Japs had rushed our 3 tanks that one was believed to have been set on fire, and that 4 troop of No1 commando was surrounded by snipers but the situation was well in hand.

I found Lt Col Trevor and some of his HQ sniping at a diversion party down in the bushes and paddy in rear of his HQ. I borrowed a Garand rifle and both Cpl Christopher and myself had a few pot shots with no obvious results, but Col Trevor knocked one over and so did some of his signallers. An officer and three other Japs were found later in the target area. Capt. Cotton of 42 Cdo rushed out and got his sword.  He was shortly afterwards wounded in the thigh by a shell I think.

One of the Japs down in the field was lying on his back moving his arm from time to time.  We hoped to get him as a prisoner, but he killed himself with a grenade.

The Brigadier came along and so I went back to Bde and had my breakfast.

Later presumably after 0930hrs I went back to see Col Trevor again. By this time he had gone up and joined 4 Troop.  I visited him there, there was a good deal of fire at the time, but Col. Trevor didn’t seem to think there were very many Japs in front of him.  As I went forward to see Col.Trevor  I met Lt. Crewe being carried back along the ridge, sitting up on a stretcher.  He had been wounded in the foot and leg.  Capt. Smith of 42 was already with Col.Trevor by this time.

I went down the gully to where the tanks had been laagered. I found that one had indeed been burnt out. There was a good many bodies about. None of them had been moved so I proceeded to inspect them. The first was an officer.  He had got right inside the tank and set it on fire.  About six of his men were dead behind him within 20 yards or so.  They had pole charges (round charges on the end of bamboo poles). One of them had gone off prematurely and killed its owner very thoroughly. He was covered in a sort of powder the colour of mepacrine. In the paddy were four riflemen who seemed to have been giving covering fire at close quarters. One had died with his forefinger in the loop of a 36 grenade.  Taking a look at the other party, we found one of them breathing.  His right forearm shattered, but some SBS soon whisked to the MDS. He is still alive.

During the morning it was reported at Bde. HQ that an ICA had destroyed a party of Japs crossing the N Chuang (Thames).  I took a patrol to investigate this report.  We found no bodies but saw the imprint in the mud of at least one barefooted man; found 3 clips of Jap rifle ammo in their forming up area and a Bren magazine at the point where I consider they may have landed, for it was opposite to the mouth of the contributory of the ‘Thames’. During all this time there was continuous firing on 170 and we saw several of our own troops advancing among the tree at the top of the hill.  I got the impression that very little of the hill was left to the Japs.

Perhaps it was my next visit to Bde. that a report came in from Col.Trevor that there were still 40 Japs at the end of the feature.  The Brig.turned to Capt.Tripp, the IO and said ‘send that to division tell them there are 20 Japs at the end’.

By this time a steady stream of casualties was moving along the back of 170 to the MDS, and one marine said he saw 61 brought past during the day.  While I was at 1 Cdo’s HQ on one occasion, about 1500hrs, a report arrived that the situation was critical.  However reinforcements from 5 Cdo had begun to arrive from PINNER and the Brig. had ordered Lt Col Pollitt MC to take a troop forward as soon as he had arrived. 1530 Hrs Col Pollitt and Capt.Burr of 4 troop 5 Cdo arrived 1 Cdo HQ.

The next time about 1630hrs I went to see Col Trevor I met Col Pollitt being carried back on a stretcher face downwards. He had been shot through the knee. I also met Lt. Bolitho walking back, shot in the stomach being supported by one man and very angry.

I met the Brigadier who ordered me to arrange for a flanking movement by a Coy of Punjabs to pin down the enemy on the west side of 170 with fire from the paddy; and for the tanks to go into action again.

Only one tank was in action by this time, but as soon as I could get hold of a platoon from 5 Cdo it advanced again. I met Major Stuart, told him Col Pollitt was hit and arranged for this support.

I then found the Col of the Punjabs and arranged for two platoons guided by my servant, to go and engage the enemy from the mangrove where they themselves had originally formed up.

When the Brig returned to his HQ he ordered me to organise the defence of the hill for the night. I went to see Col.Trevor  and met him coming back at about 1630hrs, from his forward post. I had Major Stuart with me and we arranged to reinforce 1 Cdo’s forward troop with a strong fresh troop of 5Cdo and if possible to withdraw the tired troops of 1 Cdo.  As it was getting dark I told Col Trevor it was unlikely that we could do more than reinforce him for the night.

By the time I got back to the area of Bde. HQ with Lt. Nias , 10 of No 1 cdo, I found that enough Punjab’s had arrived to take over from 2 troop No 5 Cdo so I sent Capt.Beard guided by Lt. Niasto report straightaway to Col Trevor.  I got Capt. MacLennan the camp commandant, to show the Punjabs all the posns on the right and returned main HQ No I Cdo, where to my delight (and also surprise) I found that troops of 42 Cdo were already reinforcing the two weakly held features.  We were now able to take out 1 Cdos forward Troops.  I saw Col Trevor and he was satisfied that all was well. I went back to Bde.  It was dark.

The next morning there was more firing. I went again to see Col Trevor and Maj Stuart; we had had four casualties in a weak attack from grenades.  I found him very eager to attack and drive the enemy off the end of 170, once and for all.  Since we were to hand over that day I was in favour of this.

Later I heard that he had succeeded and the hill was covered with dead. I went there and saw a truly incredible scene.  The Japs covered the hill almost like a carpet. They were piled onto those of our our posts which they had swamped. Our soldiers were busy collecting Brens and Jap ******* , and looking for documents and so on.  Several of our own men were in the open where they had fallen in one of the many counter attacks. A lot of Japs had been killed by the shelling and mortaring. Among some bushes on the N side of 170 were 16 dead Japs and two of our own dead. Here we captured another prisoner, who had half his foot blown off and had crawled into the bushes.  He wanted us to shoot him.

There was still a good deal of mopping up to be done in the chaung and in the paddy, but the battle was decided by the clearing of 170.

Except that the Japs hardly used their artillery except in the preliminary barrage –presumibly because of the lack of W/T- and their mortar practice is very poor compared to the Germans, the fighting on 170 could hardly have been more severe. I am convinced that no European troops would have attempted to hang onto their precarious foothold at the end of 170 for as long as these Japs did, in the face of all the arty , 3 “ mortar and small arms fire brought to bear on them.  For 24 hrs the forward troops were within grenade range. On our side a man often became a casualty within a few minutes of taking over a Bren from another who’d been hit.

Had the pimple at the end of 170, divided, as it is, from the rest of the position by a sharp re-entrant been carried, it would have been a major operation to re-take it. Above anything it was the long and stubborn resistance of 4 Troop 1 cdo and the heroism of the officer commanding the forward platoon that prevented this.  According to PW reports, 500 Japs attacked the position of whom 300 were killed.