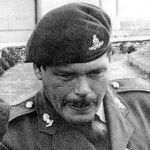 Sergeant Raymond Austin, 79 Kirkee Battery, was awarded the Military Medal whilst attached to 'X' Company, 45 Commando RM, in Aden.
Recommendation
"On the 13th October 1966, Sergeant Austin was in charge of a 105mm gun crew which was attached to ‘X’ Company, 45 Commando Royal Marines for an operation in the Wadi Taym area of Qutaibi Province of the South Arabian Federation.
‘X’ Company’s position was on the very open and exposed rocky feature known as ‘Table Top’. Through his drive and leadership Sergeant Austin managed to get his gun sangar constructed in the few remaining hours before last light. This was a gruelling task in the heat and dust, but his zeal was rewarded for, when darkness fell, the position immediately came under small arms fire. As the enemy were below them, it was difficult for the gun detachment to engage them without striking the top of the sangar.
Well aware of the danger and regardless of the enemy fire, Sergeant Austin calmly controlled accurate fire onto the enemy, the rounds passing only a few millimetres over the sangar lip.
At 23.15 hours the following night, the company was heavily attacked from two directions at once, with mortars and blindicides from the south and automatic weapons and rifle fire from the west. Although Sergeant Austin’s sangar received a direct hit from a blindicide, the building was so sound that there were no casualties.
Led by him with complete disregard for his own safety, the crew moved the gun through an arc of 180 degrees under heavy fire, removing the armoured shield and stanchions which were obscuring the night aiming lamps, and engaged the dissident mortars at a range of 500 metres.
As a result of this action the enemy lost a most important leader and at least five others were wounded before they withdrew.
Throughout the operation Sergeant Austin’s energy, sense of duty and cheerful efficiency were an outstanding example to all. His foresight and professional ability certainly prevented casualties and his courage and determination under fire greatly influenced the successful outcome of this engagement."
Sources
London Gazette 44321, page 6082; errata in LG44430, page 11261.
[Image] His sister Susan Donohoe.
Photo of Commando in Gallery:
Yes
Archive pages :
29 Commando Regiment RA
45 Commando RM
Special Air Service
Aden, Radfan, South Arabia Federation