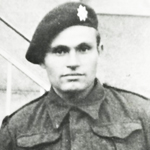 Private Pierre Laux died of wounds during operations at Flushing, Holland.
Extract from a report after the operation.
3 Troop, page 24.
"The distance between the harbour area and the first objective, BRAEMAR, was covered as fast as possible, and the first objective was reached at first light, 0700 hours. On the way to the first objective Gnr. Harvey was killed by enemy MG fire.
Numerous enemy were seen, but were apparently in rather a disorganised state and concentrated on cover rather than concerted resistance.
Various pill boxes and machine gun posts were by-passed with the exception of one pill box in the neighbourhood of BRAEMAR. As this pill box covered the approach to BRAEMAR an assault group of C sub section under Sjt Jackson was detached to deal with it.
In doing so Pte. Laux was killed at the entrance to the pill box."
​Sources
CWGC.
Casualty Lists / National Archives file WO417/85.
Bill Harvey, son of Gunner Harvey, No. 4 Cdo.
Image: Musée National d'Histoire Militaire.
Primary Roll of Honour:
'4 Cdo. Roll of Honour'
Photo of Commando in Gallery:
Yes
Photo of grave in Gallery:
Yes
Archive pages :
No 4 Commando
French