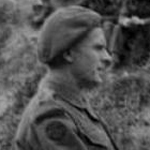 Captain Peter Tasker, R.A.M.C. attached to No 6 Commando, was awarded the M.C. , in recognition of gallant and distinguished services in Normandy [1].
Citation
On the 10th January 1944 at Amfreville the R.A.P. was subjected to heavy shelling and mortar fire, many direct hits being scored in the farm building in which it was situated. Captain Tasker throughout the shelling showed unflagging devotion to duty and personal disregard for danger, even carrying out blood transfusions during the height of the shelling. One shell landed in the entrance to the stables adjoining the R.A.P., starting a petrol fire which trapped a wounded man within the stables. Captain Tasker dashed through the flames and carried out the wounded man having first looked and found all the other men in the stables were dead. At all times his example proved an inspiration to his men, and stretcher bearers, imbuing them with the same disregard for danger that he himself showed [2].
Doctor Peter Hugh Tasker MC, MD, FRCS, emigrated to Canada in 1951 [3].
Sources
[1] London Gazettes Supp. 36679, page 4046.
[2] National Archives file WO 373/48/211.
[3] George Funeral Home Ltd., online obituary.
[3] Various CA Newsletters.
Photo of Commando in Gallery:
Yes
Archive pages :
No 6 Commando