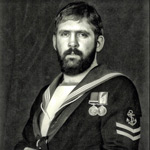 Leading Medical Assistant Paul Youngman RN, attached to 45 Commando Group, received a Mention in Despatches in recognition of his service during operations in the South Atlantic.
Recommendation
Falkland Islands
11/12 June 1982.
"LMA Youngman was employed as first line medical support to a rifle Company during operations in the Falkland Islands. Throughout this time he was normally the only source of trained medical assistance available to the Company and was thus required to deal single handed with a large number of minor injuries as well as battle casualties. This he did with calm efficiency and good humour, often in the most appalling weather.
On the night of 11/12 June, during the attack on Two Sisters feature, he operated in support of one of the assault companies, rendering outstandingly efficient first aid to casualties as they occurred, notwithstanding that by doing so, he was exposed to enemy machine gun fire and mortar fire himself. In total darkness, freezing temperatures, and under heavy machine gun fire, the quality of his resuscitation efforts on several wounded men was such that they needed little further assistance from a medical officer before being evacuated. At one point in the battle he accompanied a gravely wounded man back by helicopter, rendering life saving first aid on the flight, and then returning to continue to treat casualties on the battle field.
His courageous action while under fire, his swift and expert assistance, and his selfless devotion to duty, undoubtedly make him worthy of the award of the Military Medal."
Paul passed his All Arms Commando Course in March 1978.
Sources
London Gazette 49134, page 12843.
National Archives file WO373/188/215.
[Image] Paul Youngman.
Notes
Recommended for the Military Medal by Lt. Col. Whitehead OC 45 Commando RM, received a MiD.
Photo of Commando in Gallery:
Yes
Archive pages :
3 Cdo. Bde. RM (Medical)
45 Commando RM
Falklands