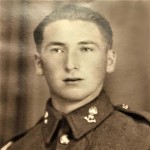 Gunner Patrick O'Rourke, from St Helens, Lancashire, died of wounds during operations in Holland [1][1a][1b].
He was the son of working class Irish immigrants from Dublin [2].
January 1939 attested into the Royal Artillery aged 18 [3][3a].
24 November 1943 posted Royal Artillery (Field) [3].
6 April 1944 became a member of the Old Comrades Association of the Special Service Brigade at Achnacarry [4].
22 June 1944 (No.6 Commando) wounded in Normandy, France [5].
10 February 1945 (No.6 Commando) wounded again in Holland, this time fatally [1b].
At the time of his death his Commando were engaged in operations in the area of Bell Island (Osen), Brachterbeek, Holland [6].
Sources
[1] CWGC.
[1a] Royal Artillery Casualty Card.
[1b] Casualty Lists / National Archives file WO417/88.
[2] [Image] Ray Edwards (nephew).
[3] Royal Artillery Attestation Records.
[3a] Army Form B271A.
[4] Membership Card in CVA Gallery (see notes).
[5] Casualty Lists / National Archives file WO417/77.
[6] 1 Cdo. Bde. HQ War Diary January 1945.
Notes
[1] Recruits passing out from their Commando Course at the CBTC  were encouraged to join the new Association set up by the Commandant Lt Col Vaughan. Gnr. O'Rourke's membership card is signed by Capt. Sharples, CBTC Admin Officer.
[2] There are more photos in our gallery including the cross at his original grave and his CWGC headstone after reburial.
Primary Roll of Honour:
6 Cdo. Roll of Honour
Linked content:
1 Cdo Bde HQ War Diary 1st - 9th April 1945
Photo of Commando in Gallery:
Yes
Photo of grave in Gallery:
Yes
Archive pages :
No 6 Commando

Mr Erik Ficken from The Netherlands whose family live nearby and have adopted his grave adds: "In January 1945 No.6 Commando were assisting in Operation Blackcock. To do this, they crossed the Maas and the frozen Juliana Canal from the Liberated Netherlands. Although our village, Maasbracht, was already liberated on 23/24 January 1945; the German armies maintained a bridgehead on the island of "Osen", between the Maas and the Lateraal Canal, where they fought stubbornly. In the weeks of fighting, Patrick O'Rourke eventually lost his life on February 10, 1945. The battle for the island of "Osen" took the lives of 24 Allied soldiers, 30 were seriously injured and 12 were missing. We will continue to honor his war grave at Nederweert with great respect."