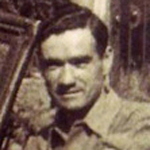 Lance Sergeant Patrick McVeigh, 'F' Troop,  was awarded the Distinguished Conduct Medal for gallant and distinguished services in NW Europe.
'At Flushing on 1st November 1944, in command of a sub-section, went to the assault of the Naval Barracks defended by approximately sixty enemy. After detatching himself and disposing of at least two enemy pockets of three to six men with machine guns he paved the way for the break-in to be made. He then led the assault on th barracks, which he cleared, accounting for 25 enemy killed and wounded, and taking between 30 and 40 prisoners. He showed personal bravery to an outstanding degree, and by his cunning leadership attained his objective at the cost of only one man killed, though fighting throughout against great odds.'
Patrick McVeigh enlisted aged 18 at Preston Depot in 1931.  He was one of the first to join No.4 Commando when raised, and served with them until disbandment.  A highly respected NCO, here are just two quotes from the book "Swiftly They Struck" written by a Section Officer of F troop, Murdoch McDougall. He writes "That was my first defeat by McVeigh, who in the times to come was to prove a tower of strength in the troop. Small in stature, slimly built, his personality was such that he became an almost legendary figure throughout the whole Commando."
A fine boxer, in 1936 he was the Inter Service boxing  winner.  He held the Southern Command Cup,  Kings Shield,  Sassoon Cup.  Lieutenant McDougall goes on to quote a Sgt Major referring to Patrick's boxing skills,  You want to see him box. Marvellous he is. Runner up at his weight in the whole Army before the war.  Murdoch McDougall's book is full of references to Patrick McVeigh and reflect the respect he had for him whilst he was his Section Officer.
Sources
London Gazette 36994, page 1542
National Archives WO 373/52/718
Paul McVeigh (nephew)
View CVA Gallery images here.
Photo of Commando in Gallery:
Yes
Archive pages :
No 4 Commando