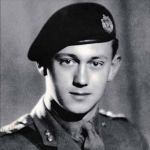 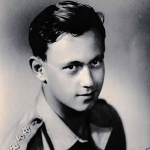 Captain Michael Alfred Wenner was commissioned on 14 December 1940 as Second Lieutenant in the Lancashire Fusiliers.
After being posted with his Regiment to India he volunteered for the 151st Parachute Battalion being raised at Delhi in October 1941. Injuries sustained in two parachute training accidents resulted in him being told by medical staff that he would not be able to make another parachute jump.
He joined 2nd Parachute Brigade in Naples as a Staff Officer before volunteering for the Commandos. He was attached to No.9 Commando in Italy during 1944 and by 1945 was the Intelligence Officer for No.9 Commando.
Post war Michael Wenner had a distinguished career in the Diplomatic Service serving in many different countries. In 1967 he was appointed H.M. Ambassador to San Salvador in Central America.
His life story was published in the 151/156 Parachute Battalion Association newsletter no.2 issued January 2021 [view.....].
Sources
Commando Association newsletter 46 issued March 1968.
Obituary published in the Daily Telegraph 1 February 2021.
[Images] Mrs Holly 'Raven' Wenner (Michael's wife).
Notes
The book 'So It Was' written by Michael Wenner. Synopsis: An autobiography of an army and diplomatic-service life, taking the reader around the world, stopping at Sweden, Israel, the Bolivian jungle, China, South-East Asia and the volcanoes of Central America.
Photo of Commando in Gallery:
Yes
Archive pages :
No 9 Commando