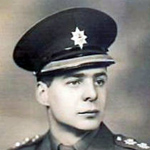 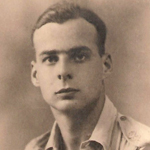 Michael Stilwell was commissioned into the Cheshire Regiment on the 22nd Sept. 1940. On the 20th August 1943 he was promoted Lieutenant, serving with the Coldstream Guards before volunteering for the Commandos and being posted to No 2 Commando. He was later promoted war substantive Captain.
Captain Stilwell was awarded the Military Cross for his gallantry during operations at Spilje, Albania.
Citation
Spilje Albania, July 28/29, 1944. Operation Healing 11.
"Captain Stilwell was in command of a force consisting of 2 Troops, whose task was to assault enemy positions which were well placed on the top of high ground with steep approaches. Captain Stilwell led the assault himself, and by his courage and leadership maintained a steady advance under heavy machine gun fire, until the positions were all over-run. Near the top he was badly wounded in the buttock, but insisted on carrying on till the consolidation was complete. He then organised the exploitation of the ridge, but did not accompany the exploiting party as he could not move fast enough. He refused to be carried back to the Regimental Aid Post as stretcher bearers were already busy with other casualties, and, although in great pain, he insisted on attending to casualties near him, and organising their evacuation."
He retired from the service on the 15th January 1954 being granted the honorary rank of Major.
He was appointed OBE in HM Birthday Honours List of June 1960 and CBE in the 1979 New years Honours list for services to the British Community in Portugal.
Sources
LG Supp.  336139, p3728; LG Supp. 34957, p5777; LG Supp 36730, p4569; and LG Supp 40122, p1521.
Citation - National Archives file WO 373/46/211.
Image: Michael Stilwell (son).
Photo of Commando in Gallery:
Yes
Archive pages :
No 2 Commando