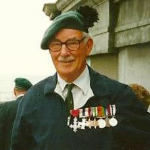 Temporary Captain Michael Long was awarded the Military Cross in recognition of gallant and distinguished service during operations to cross the Garigliano river on the night of 29/30 December 1943. This was known as Operation Partridge [1][2].
Recommendation
"West of Garigliano River on the night of 29/30 Dec.'43.
This officer was in command of one of the troops under Captain Cameron. He led his troop in the attack, and then swam across a strong current under mortar fire to a pile of the demolished bridge, taking a rope, after efforts to cross in a rubber boat had failed. He organised a bridgehead on the far bank, which was still in enemy occupation, and held it until the whole force was safely over."[2].
Sources
[1] London Gazette 36497, page 2044.
[2] National Archives file WO373/5/47.
[3] London Gazette 43483, page 9505.
[4] London Gazette 47723 published on the 29 December 1978. Page 15 of 32.
[Image] David Kealy / CVA Gallery image.
Linked content:
9 Commando, Overseas
Photo of Commando in Gallery:
Yes
Archive pages :
No 9 Commando