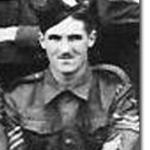 This letter was written by Lance Sergeant Bill Gibson [more....] of No.2 Commando 6 troop. He wrote it before they set off on Operation Chariot, the raid on St Nazaire. It was to be delivered in the event of his death. Sadly Bill and the friend he mentions, Lance Sergeant Peter Harkness [more....], were both killed in action during the raid.
The letter for many years was read out at Services by the late Captain Micky Burn MC who was Bill's troop Captain on the raid. Micky was regarded as the 'keeper' of the letter as no relatives of Bill are known. The letter has been produced in part in various publications, however we felt that there should be a permanent home for Bill's final words to his father. With the support and help of the author James Dorrian, and with the approval and permission of Micky Burn MC, sadly now now deceased, and the then CVA National Secretary Captain Geoff Murray, this transcript of Bill's final letter is reproduced here.
Although many years ago Micky himself made unsuccessful efforts to trace any family, we once again made efforts more recently. To date we have had no success.
Notes on reproduction
Simply out of respect for this young Commando who gave his life in such a heroic manner, we would ask those who desire to reproduce this letter that it be reproduced in full and include proper information about LSgt Gibson and his friend Peter Harkness, and also a link to the Commando Veterans Archive www.commandoveterans.org
L/Sgt. Bill Gibson's letter to his Dad
"My dearest Dad by the time you get this I shall be one of the many who have sacrificed their unimportant lives for what little ideals we may have - my own ideals I can thank you for.
The job we have been on has been something worthwhile - it has virtually been suicide but the repercussions after we will have finished our task will be very far reaching in as much as the raiders who sink so many of our merchant ships will be put out of action for at least six months - so the food line from America should be unimpaired. Peter and I will be together- our task is just a wee bit dangerous, but if we can hold Jerry off it will mean the saving of the lives of a lot of our pals.
We have been on this boat for a fortnight now, and we are all determined to see this through. I salute you all, No.2 Commando - they are a great lot of lads.
Tomorrow moming I am going to Holy Communion - the first communion I have ever been at - but I know God will help us all he can, and I pray, Dad, that he will help you, and bless Betty for all she has been to us. My will has been made out - it seems so silly but we have all had to do it.
I would like you. Dad, to write a note to my Irish girl and let her know what has happened. You will get her address in any of the letters - her name is Anne Brien - would you do this for me.
The reason I am writing this at all, Dad, is just the thought that it might be a little better for you to get this rather than the dreaded telegram.
I don't think I have made any enemies in the world - I have made a lot of good friends, but you've been the best pal I've ever had. Your influence, plus our Alex's, has certainly helped me to pass through life with a character which, though a bit rough in some things, still has all the fine thoughts gained from both of you. Sandy, I suppose, I'll have met by this time so don't be worried, Dad.
It seems ever so peculiar to be writing this letter. We've just finished our tea and the sunshine is streaming through the portholes. We've been on deck sunbathing all day. Peter is very red now, and I am myself, and everything seems so far removed from the job ahead of us. We have not been allowed to leave the boat for over a fortnight now except for organized parties to get some exercise. With spring in the air and everything looking so beautiful we can only now appreciate how lovely everything is - almost like condemned criminals.
Well, Dad dearest, I'll close now. Don't worry and don't be too unhappy - remember what you always told me - to keep my chin up. I'll have done what chance has made my duty, and I can only hope that by laying down my life the generations to come might in some way remember us, and also benefit by what we've done.
It is unnecessary for me to tell you how sorry I am at not being able to do a lot of the things I have longed to do to pay you back for the chance you gave me. In a time like this I turn to you, Dad, and God - I hope there will be peace for everyone soon. Give my love to everyone - I'll remember you.
Your loving son, Bill"
Linked Content:
GIBSON, William
Unit Archive (excludes gallery):
No 2 Commando