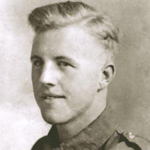 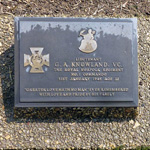 Lieutenant George Arthur Knowland died during operations at Hill 170, Kangaw. He was posthumously awarded the Victoria Cross.
Prior to this he was a Sergeant in No 3 Commando and took part in their action at Termoli in 1943. He was commissioned on the 23rd June 1944 and then joined No 1 Commando in the Far East.  Reference to this, and to his leadership qualities,  is made in a Testament to George Knowland by Jack Cox No 12 & 3 Cdo. [see documents below].
[Additional Source : LG Supplement 36673, page 3992, publication date 25th Aug 44.]
Citation for the Victoria Cross
War Office, I2th April 1945.
In Burma on 31st January, 1945, near Kangaw, Lieutenant Knowland was commanding the forward platoon of a Troop positioned on the extreme North of a hill which was subjected to very heavy and repeated enemy attacks throughout the whole day. Before the first attack started, Lieutenant Knowland's platoon was heavily mortared and machine gunned, yet he moved about among his men keeping them alert and encouraging them, though under fire himself at the time. When the enemy, some 300 strong in all, made their first assault they concentrated all their efforts on his platoon of 24 men, but, in spite of the ferocity of the attack, he moved about from trench to trench distributing ammunition, and firing his rifle and throwing grenades at the enemy, often from completely exposed positions.
Later, when the crew of one of his forward Bren Guns had all been wounded, he sent back to Troop Headquarters for another crew and ran forward to man the gun himself until they arrived. The enemy was then less than 10 yards from him in dead ground down the hill, so, in order to get a better field of fire, he stood on top of the trench, firing the light machine gun from his hip, and successfully keeping them at a distance until a Medical Orderly had dressed and evacuated the wounded men behind him. The new Bren team also became casualties on the way up, and Lieutenant Knowland continued to fire the gun until another team took over.
Later, when a fresh attack came in, he took over a 2 in. Mortar and in spite of heavy fire and the closeness of the enemy, he stood up in the open to face them, firing the mortar from his hip and killing six of them with his first bomb. When all bombs were expended he went back through heavy grenade, mortar and machine gun fire to get more, which he fired in the same way from the open in front of his platoon positions. When those bombs were finished, he went back to his own trench, and still standing up fired his rifle at them. Being hard pressed and with enemy closing in on him from only 10 yards away, he had no time to re-charge his magazine. Snatching up the Tommy gun of a casualty, he sprayed the enemy and was mortally wounded stemming this assault, though not before he had killed and wounded many of the enemy.
Such was the inspiration of his magnificent heroism, that, though fourteen out of twenty four of his platoon became casualties at an early stage, and six of his positions were over-run by the enemy, his men held on through twelve hours of continuous and fierce fighting until reinforcements arrived. If this Northern end of the hill had fallen, the rest of the hill would have been endangered, the beach-head dominated by the enemy, and other units farther inland cut off from their source of supplies. As it was, the final successful counter-attack was later launched from the vital ground which Lieutenant Knowland had taken such a gallant part in holding.
Primary Roll of Honour:
1 Cdo. Roll of Honour
Linked content:
Commandos awarded the Victoria Cross
Photo of Commando in Gallery:
Yes
Photo of grave in Gallery:
Yes
Archive pages :
No 1 Commando
No 3 Commando
‹ 1 Cdo. Roll of Honour up KNOWLAND, George Arthur, Lieut. VC announcement in Gazettes ›