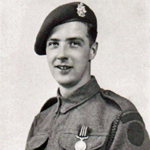 Private Kenneth Darlington was awarded the Military Medal[1] for gallantry during Operation Cartoon, a successful raid on Stord Island. The target was the demolition of an Iron Pyrite mine.
After enlisting into the 8th Bn, Border Regt, at Carlisle in 1940, Pte. Darlington volunteered for the Commandos. He was attached to No.12 Commando serving in 'D' troop as part of North Force, Shetland Islands & Norway in 1942-43. He then had a 3 month attachment with 2 SBS before his final attachment to No.4 Commando in 1944/45.
Award Recommendation
Pte. Darlington was with a detachment of the Special Service Brigade which landed at Sagvaag, Norway, on the night of the 23rd/24th January 1943, and was with a party detailed to establish a road block on the road Leirvik to Sagvaag. While maintaining this block, fire was opened on an approaching car which was brought to a halt. Two men escaped from the car, but a third one, believed to be an Officer, was killed.
Private Darlington under continuous fire from snipers stalked to the car, searched it, and obtained a briefcase, a small attache case, and some weapons.
His coolness and devotion to duty enabled valuable information to be obtained [2].
Award Sources
[1] London Gazette 35952, page 1405.
[2] National Archives file WO373/93/84.
Additional  sources
Linked content:
A timeline of the Special Boat Section (Home)
Photo of Commando in Gallery:
Yes
Archive pages :
No 12 Commando
Special Boat Section/Squadron/Service
No 4 Commando