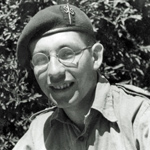 Joseph Edward Chancellor Nicholl was commissioned 2/Lieutenant on the 23rd March 1941. [1]
He joined the Commandos in 1942 subsequently becoming a Lieutenant in 6 Troop. After 6 Troop were amalgamated with 4 Troop he continued there until promoted Captain of 4 Troop. Later he took over as Captain of 5 Troop being awarded his Military Cross during operations at Lake Commachio [2].
Citation
In the action on the Spit across Lake Comacchio on 2 Apr 45, Capt. Nicholl was in command of 5 Troop, 2 Commando. Owing to a break-down in landing craft, Capt. Nicholl's Troop arrived late and was ordered to attack enemy positions defending a bridge, with no opportunity of previous recce or planning as speed was imperative. He personally led his Troop across 800 yds of open country in daylight in the face of heavy S.A. fire from uncharted weapons pits, destroying by himself at least one spandau post and several rifle pits.
Later in the day, Capt. Nicholl led his Troop against a strongly-defended gun position. Although he suffered a number of casualties from point blank gun fire and S.A. fire he infiltrated forward with a Bren Team and harassed the gun team with such tenacity it was forced to withdraw.
On the following day during the advance up the Spit Capt. Nicholl's Troop which was leading was pinned by vicious and heavy D.F. fire. Capt. Nicholl inspired all ranks by his great coolness and personal disregard for his own safety when visiting forward elements to rally them for a further advance.
After the war he took Holy Orders and became Reverend Nicholl MC.
Sources
[1] London Gazettes Supp. 35133, page 2101.
[2] London Gazettes Supp. 37162, page 3494.
Photo of Commando in Gallery:
Yes
Archive pages :
No 2 Commando