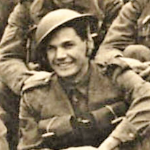 Gunner John Abbott was awarded the Military Medal in recognition of gallant and distinguished service in the combined attack at Dieppe, France, on 19 August 1942 [1][2].
Recommendation for MM
This young soldier, never in action before, was the only bren gunner to get ashore at his beach and fortunately proved to be a cool man with no idea of anything but to get a good target without considering his personal safety.
In the early stages of the raid on Berneval Battery he helped to turn the tables on the enemy who got in a valley at close range before they were seen. Firing at 65 yards range with hardly any cover he was lucky to escape with nothing worse than a shower of tiles on his head.
Doing what literally amounted to the work of three men he became utterly exhausted, and was nearly drowned during the withdrawal. He kept his head and was towed away on the lifelines behind the L.C.P. until he was finally rescued [2].
Sources
[1] London Gazette 35729, page 4328.
[2] National Archives file WO373/93/834.
[3] No.3 Commando War Diary entry of casualties.
[4] Casualty Lists / National Archives WO417/77 (2 entries).
[5] Fighting with the Commandos, author Stan Scott 3 Troop No.3 Cdo.
[6] Registers of births in Dwyfor, Caernarvonshire, Wales.
[7] England and Wales Government Probate Death Indexes for Glamorganshire.
[Image] Photos of 3 Troop in Gallery, Identified by Stan Scott of 3 Troop.
Archive pages :
No 3 Commando