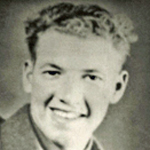 Private John Notman died during operations at Le Hauger, Normandy.
Extract from the Dumfries and Galloway Standard
Published Saturday 15 July 1944
"Annan Commando Killed :- Mr and Mrs John Notman, 1 Hallmeadows Place, Annan, received word on Wednesday that their eldest son, Private John Notman, has been killed in action in France. Private Notman was a native of Gretna, and was educated at St. Columba’s School, Annan. On completion of his education he was employed at Newbie Engineering Works, and joined the K.O.S.B. on the outbreak of war. He was in France in 1940, and afterwards joined the Commandos, serving with Lord Lovat’s men. He took part in the landing at Dieppe, and landed in Normandy on D-Day. He is survived his father and mother, two brothers, and four sisters."
Sources
CWGC
His niece Jacqueline Foster and John's sister Anne Notman Craig.
Dumfries and Galloway Standard
British Newspaper Archive (website britishnewspaperarchive.co.uk); The British Library Board.
Primary Roll of Honour:
'4 Cdo. Roll of Honour'
Photo of Commando in Gallery:
Yes
Photo of grave in Gallery:
Yes
Archive pages :
No 4 Commando