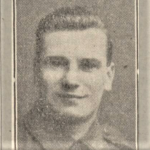 Sapper John Allan from Bridge of Allan, Stirling, enlisted on 9 May 1938 at Dunblane. He died of wounds during operations in Germany on 29 April 1945. He had been wounded twice before.
Extract from the Stirling Observer
Article re first wounding
"Official news has reached Mrs Allan, c/o Clark, 6 Baker Street Stirling, that her husband Sapper Jack Allan, Commando Regiment, was wounded in the thigh in the invasion of France and is now in hospital in this country.
A Black Watch territorial before the war, Sapper Allan was immediately mobilised and served in the Engineers for some time before being transferred to the Commandos in 1941. He had previously seen active service taking part in a raid on Norway. Twenty five years of age, in civil life he was employed as a plumber with Mr Anderson, Bridge of Allan."
Sources
CWGC.
Casualty Lists / National Archives files WO417/77, WO417/88, and WO417/92.
Royal Engineers Casualty Card.
Stirling Observer publshed 22 June 1944.
[Image] Stirling Observer.
Primary Roll of Honour:
6 Cdo. Roll of Honour
Linked content:
1 Cdo Bde HQ War Diary Jan-Mar 1945
Photo of grave in Gallery:
Yes
Archive pages :
No 6 Commando