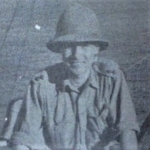 Major James Wakeling, 40RM Commando, was awarded the Military Cross for great courage and exemplary behaviour whilst carrying out commando operations under heavy enemy fire off the Yugoslavian coast [1][2].
Recommendation
"3/4 June 1944 Brac.
This Officer was the Troop Commander of the leading Troop in the assault on Pt. 622. During a long approach to the objective under continual fire he kept his Troop well under control and never ceased to encourage them on. He formed his Troop up in most difficult circumstances and pressed home his attack through wire and mines under particularly heavy fire.
His Troop successfully reached their objective killing numbers of the enemy and taking prisoners. He then reorganised his Troop under heavy mortar fire and beat off a counter attack.
Only when he found himself surrounded by Germans, out of touch with Headquarters, and running short of ammunition did he order his Troop to withdraw. This he succeeded in doing with remarkably small losses.
His example and high standard of leadership were largely responsible for the success of his ....[illegible] "[2].
Sources
[1] London Gazette 36979, page 1386.
[2] National Archives file WO373/47/54.
[3] Navy Lists - see Linked Content below.
[4] Obituary in the Independent 13 Oct 2004.
[Image] Collection of Jeff Gordon.
Linked content:
'RM Commando Officers Aug.1943.'
40RM Cdo. Officers, Oct.'44
Archive pages :
43RM Commando
40RM Commando