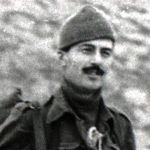 Lieutenant James Ennis received a Mention in Despatches in recognition of gallant and distinguished service on 19 August 1942 in the combined attack on Dieppe [1].
Previously participated in the Hardelot raid acquiring the nickname 'Carpet Slippers' [2].
Extract from the Evening Despatch Thursday 23rd April 1942.
"Commando Carpet Slipper Hero of Boulogne Named.
The carpet-slippered Commando officer, who, armed with a cosh invaded Boulogne in comfort with the Commandos early yesterday morning, is 28-year-old ex-Police Inspector James Ennis, who comes from Glasgow. Former police colleagues in the East End of London, 'Jock' Ennis was stationed at Arbour Square and Limehouse before the war, were not surprised at his latest role. He was always a good man in a rough house in those days, and more than once proved that he could look after himself during the Fascist and anti-Fascist demonstrations in that part of London. Once he was involved in a particularly severe scrap on Tower Hill."
Extract from the St. Aloysius College Glasgow website.
"James F. Ennis (1923) read Law at the University but gave this up to take a commission in the Clyde Heavy Brigade R.A. (Territorial Army). This in turn he relinquished to pass into Hendon Police College at his first examination. He passed out of Hendon as Junior Station Inspector and was appointed to Limehouse. When the war broke out he was permitted to rejoin the Artillery in which, because of his previous experience, he received a commission and was promoted Lieutenant in June 1940. When Commandos were first formed early in 1941 he was posted to No. 4 Commando and took part in several raids on the coast of Europe."
Sources
[1] London Gazette 35729, page 4328.
[2] Evening Despatch via the British Newspaper Archive.
[3] Metropolitan Police Records via Tony Moore, FRHistS, former Chief Supt. Met. Police.
[4] London Gazette 34772, page 285.
[5] Awards French to British / National Archives WO373/ 186/14.
[6] London Gazette 38212, page 1178.
Additional Sources
British Pathe News Film titled "Commandos raid Boulogne".
St. Aloysius College.
Commando Association Lost Legion List 4.
Notes
The media nicknamed him Carpet Slippers after the Hardelot raid when he left his shoes on board the Prins Albert and did the whole raid in slippers.
Linked content:
Dieppe - Operation Jubilee
Hardelot - Operation Abercrombie
Archive pages :
No 4 Commando