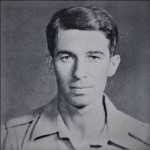 3 May 1940 wounded at Dunkirk France serving as a Private with 1st Bn. Gordon Highlanders, British Expeditionary Force [1].
Attached to and served with No.11 Commando 8 Troop (Layforce) until disbanded [5][7].
Joined 'L' Detachment Special Air Service 1941 attaining rank of Corporal [2][3][3a].
Prisoner of War March 1942 after a raid at Benghazi [3][3a].
Awarded the Distinguished Conduct Medal for his successful escape and subsequent return [2][3][3a]..
1944/5 attached No.6 Commando serving in France and Germany [4][5][6][7].
10 June 1944 (Lance Sergeant) (No.6 Commando) wounded at Normandy [4].
Post war served in the Special Section of the Kenya Police [6].
Recommendation
"This N.C.O. was captured by the Germans in Libya while returning alone from a special sabotage mission. He was sent to a Prisoner of War camp in Germany where he volunteered to act as an officer’s batman as he thought this would give him a better opportunity of escaping. He was, accordingly, transferred to Oflag XXIB, an Officers camp, where he made two attempts to escape but, unfortunately, was recaptured on each occasion.
On 18 Jul 43, while being transferred to another camp, he escaped from a transit camp at Koenigsberg and succeeded in reaching Danzig, where he boarded a Swedish ship and finally arrived at Goteborg on 25 Jul 43. This NCO showed courage, pertinacity and initiative of the very highest order under the most trying circumstances.’ [3].
Sources
[1] Casualty Lists / National Archives file WO417/12 (period ending 13 May 1940).
[2] London Gazette 36198, page 4438; and errata in LG 36217, page 4665.
[3] National Archives file WO373/62/565. (Includes a much more detailed interview this NCO).
[3a] POW - Escapers & evaders - MI9 report / National Archives file WO208/5582.
[4] Casualty Lists / National Archives file WO417/77.
[5] CVA Gallery photos of No.11 Cdo 8 Troop, and No.6 Cdo panorama Jan'45..
[6] Commando Association newsletters 6 and 8 and Lost Legion list 8.
[7] Transcript of Obituary [view....].
Notes
Wrote a book in the 1980's called 'The General Salutes a Soldier' published by Robert Hale.
Photo of Commando in Gallery:
Yes
Archive pages :
No 11 Commando
Layforce
Special Air Service
No 6 Commando
Prisoners of War