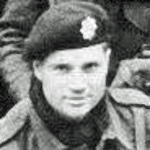 Lance Corporal Bruce Imrie, 4 Troop, was wounded by a shell fragment in his shoulder during operations at Weser, Germany, on 7 April 1945. He was later medically discharged.
He had been in the Royal Horse Artillery in India aged 14 to 21, before he came to the UK and joined the Police at age 21.
In 1939 he was a Metropolitan Police Constable residing at the Police Section House, 21A Commercial Street, London. He volunteered for the Commandos as part of one of the Police Intakes.
Sources
Casualty Lists / National Archives file WO417/91.
War Diary List of Battle Casualties No. 3 Cdo April 1945.
Commando Association Lost Legion List 6.
The 1939 Register covering Stepney, London.
His daughter Moira Noesgaard.
Photo of Commando in Gallery:
Yes
Archive pages :
No 3 Commando