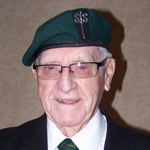 Signalman Herbert John Morris joined No 2 Commando in August 1942 from the Royal Corps of Signal. His trade had been a Lineman. No 2 Commando were based in Ayr at the time and he did his Commando training at Inveraray rather than Achnacarry. He was posted to 1 troop.

In  1939  he joined the TA having left school aged just 14.  He received his mobilisation later that year aged 17.  Throughout 1941 as a Lineman with the Signals, he was involved in the laying or repairing of communication lines within the UK, including Benbecula in the Outer Hebrides. After this he was posted to Bedfordshire and saw an advert to join the Commandos. He was bored so applied.  His interview took place at Bury St Edmunds barracks.

He sailed to Gibraltar with No 2 Commando on board HMT Dunnotar Castle. His first action was at Scaletta after which he got dysentry and was evacuated from Sicily to Hospital in Tripoli, N Africa. On recovery he and a couple of others from No 2 were told that they would have to join the nearest unit as they had been away from their own unit for more than 2 weeks. Not wishing to do this they decided to hitchhike their way back to No 2 Commando, which they eventually did, moving from Transit Camp to Transit Camp giving excuses as they went, and then getting a lift on a boat across the water back to Italy where No 2  had just taken part in the Salerno landings.  On their return they were congratulated by Lt Col.  Jack Churchill OC No 2 Cdo for using their initiative to get back.

No 2 Commando then moved to the island of Vis and Johnny Morris took part in operations against the German held islands of Hvar, Solta, and Brac. He also participated in the No 2 Commando actions in Tirana Albania, Miljet, and Sarande. Later he was with No 2 Commando when they were placed in the line North of Ravenna, Italy. He missed the action at Lake Comacchio, and finally was demobbed in 1946.

Post war he trained as a bricklayer, and he ended up doing civil engineering in Cornwall.