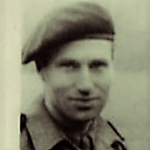 Captain Guy Vourch, No.10 (Inter Allied) Commando (French) attached No.4 Commando, was awarded the Military Cross in recognition of gallant and distinguished service in North West Europe.
Recommendation
"At Flushing on 1 November 1944 Capt. Vourch led the assault on the Post Office and Telephone Exchange which was defended by approximately 40 enemy.
By his determination and with complete disregard for danger he effected an entry into the Post Office and the survivors of the garrison were compelled to surrender.
Capt. Vourch immediately led one of his sections across a street swept by Machine Gun and Oerlikon fire, and whilst taking up position was attacked by enemy of approximately Company strength. Capt. Vourch held his position for many hours, and himself, on two occasions, went to the relief of groups of his men who were cut off by enemy infiltration.
Capt. Vourch by this action utterly frustrated all attempts by the enemy to relieve the strongpoint still holding out in the area of the town and on the waterfront."
Obituary in Commando Association newsletter 88
"Another sad event was the death of Captain Guy Vourch on the third of July 1988. Guy after Dunkirk decided to join the Free French, and in October 1940 with five like minded Bretons, bought a fishing boat and set sail for England.
None of them had any knowledge of seamanship and after the first day at sea they ran out of fuel and were at the mercy of contrary winds. After eleven days at sea and suffering from the cold, lack of food and drinking water, they were picked up by a British cargo boat that landed them at Milford Haven. Guy, after one or two false starts, joined the two French Troops of No.10 Inter Allied Commando.
He landed on 'D' Day and for his gallant part in that campaign was awarded a British Military Cross. After the war he returned to France and resumed his pre war medical studies as an anaesthetist and became the first foreigner to be made a Fellow of the Faculty of Anaesthetists at the Royal College of Surgeons.
I believe that many of us do not realise to what extent some of our allies were tested in both courage and endurance before joining the Commandos."
Sources
Awards British to Foreign / National Archives file WO373/154/416.
Commando Association newsletter 88 issued March 1989.
[Image] CVA gallery image titled "Lt Col Dawson and French Officers 10IA Cdo attached No.4 Cdo., Dec.1945" from the collection of Capt. Murdoch McDougall.
Linked content:
Normandy - Operation Overlord
'Walcheren - Operation Infatuate'
Photo of Commando in Gallery:
Yes
Archive pages :
No 10 Commando
No 4 Commando
French