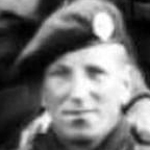 Lance Sergeant George Fraser MM, 'A' troop, died during operations at Normandy [1].
Recommendation for Military Medal
"When sent back to Ouistreham Bty (Battery), after its capture and evacuation to find an officer of his troop and the Officer's party, L/Sgt Fraser came under heavy shell fire. He searched the entire Bty area and brought out many wounded men to the RAP (Regimental Aid Post). He remained with the medical section throughout the evacuation of casualties from Ouistreham, and rejoined his Troop the following day. He continued thereafter to show exceptional courage and sense of duty during the subsequent fighting." [2].
​A former ghillie on Lord Lovat's estate, he had been encouraged by Lord Lovat to join No 4 Commando and help with the training of snipers [3].
Sources
[1] CWGC.
[2] National Archives file WO/373/48/565 / London Gazettes Supp. 36720, page 4474.
[3] The Fighting Fourth by Major James Dunning.
Notes
His brother Duncan also died in WW2 on the 19th November 1944.
326915 Trooper Duncan Fraser 'A' Sqn., Lovat Scouts, Florence War Cemetery.
Photo courtesy of Mandy Fraser shows George Fraser (centre) with 2 of his 3 brothers Duncan (left) and Willie.
Primary Roll of Honour:
'4 Cdo. Roll of Honour' 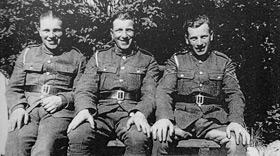