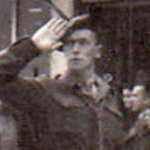 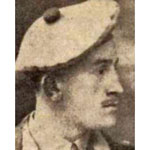 Lieutenant George Bisset died of wounds whilst a Prisoner of War in German hands during operations in Italy [1][2]. He received a posthumous Mention in Despatches in recognition of gallant and distinguished services in the field [3].
Extract from the Aberdeen Press and Journal
Capt. George Davidson Bisset, only son of Dean of Guild Joseph Bisset and Mrs Bisset, 84 Desswood Place, Aberdeen, has been wounded in action in Italy. Capt. Bisset has seen service in France, Greece, and North Africa. He had been two years on structural engineering work in Africa when he came home in 1939 to volunteer for service. He was commissioned in the R.E.'s and then joined the first Independent Company, the forerunners of the Commandos, with whom he has served since. Capt. Bisset served his apprenticeship in structural engineering  with his father, after leaving Aberdeen Grammar School, and took his M.I. Struct. E. at Edinburgh [4].
Sources
[1] CWGC.
[2] Casualty List 1939-45 / National Archives file WO417/9.
[3] London Gazette Supp. 37425, page 380.
[4] Aberdeen Press and Journal - Tuesday 24 April 1945 courtesy of the British Newspaper Archive
[Image 1] Crop from a CVA No. Cdo gallery image.
[Image 2.] Image © D.C.Thomson & Co. Ltd. Image created courtesy of The British Library Board.
​Notes
His surname has been seen spelt as Bissett as in a boxing score sheet of a match between No. 6 and No 9 Commandos in 1942 [view in gallery].
Rank  of Captain in report differs to CWGC record. May have been a temporary rank.
Primary Roll of Honour:
9 Cdo. Roll of Honour
Photo of Commando in Gallery:
Yes
Archive pages :
No 9 Commando
No 1 Independent Company