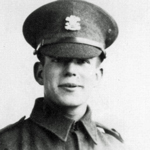 Comments
In 2013 the CVA received the following communication from a Dr. John McLeod, "I was never in the army, but I knew Garfield Grieve well - very well, because we shared the same double desk in Standard 5 at St Aidans C.E. Elementary School in Mill Hill, Blackburn. I was an overweight ten - or maybe eleven year old, my mother was a seamstress and dressmaker whose father bought her a small draper's shop, so was busy with funeral orders in 1917-8.
Garfield lived in Goit Street, the nearest we had in Mill Hill to a slum. I tended to get bullied, and Garfield was my 'Keeper'. I went on to Grammar School, but Garfield didn't. I lost touch with him, but heard that he was in the landing force in Normandy on D-Day. It was only when I was checking out just how good Google is, that I decided to put in a search for Garfield Grieve. Within minutes, I found his record, buried - and so presumably killed - in Italy. The news didn't surprise me. He didn't exactly save my life, but certainly fielded off a couple of elementary school bullies. He was a great guy. John McLeod, SO.M., Ph.D., (aged 87). "
Primary Roll of Honour:
3 Cdo. Roll of Honour
Photo of Commando in Gallery:
Yes
Photo of grave in Gallery:
Yes
Archive pages :
No 3 Commando