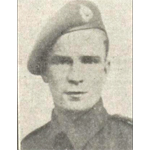 Marine Fred Snowden died during operations on the enemy held island of Brac, Yugoslavia.
Extract from the Stirling Observer Thursday 22 June 1944.
"Mrs Snowdon, 1 East Murrayfield, Bannockburn, has been officially notified that her husband, Marine Commando Fred Snowdon, has died of wounds received in action in Italy. Twenty-four years of age, he was a warehouse packer in York before joining the Marines four years ago. He served with them in Gibraltar, Norway, Iceland, Dakar and North Africa, before going to Italy. The couple were married on 5th June of last year."
Sources
CWGC.
Registers of Reports of Deaths - Naval Ratings / National Archives file ADM 104/137.
Stirling Observer Thursday 22 June 1944. British Newspaper Archive.
Image © Trinity Mirror / The British Library Board.
Notes
Surname spelt as SNOWDON in newspaper article and SNOWDEN in CWGC record.
Primary Roll of Honour:
43RM Cdo. Roll of Honour
Photo of Commando in Gallery:
Yes
Archive pages :
43RM Commando