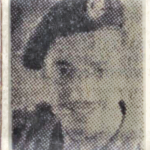 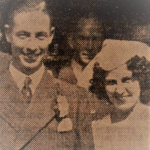 Second Lieutenant Frank Elms died during operations at Normandy, France.
A serving Police Officer in Northampton he volunteered for the Armed Forces in 1941 serving in the Royal Air Force before joining the Commandos.
Extract from the No 4 Commando War Diary
"5th to 6th July 1944 Place: Hauger - A patrol under Lieut. Elms proceeded to recce the BOIS DU BOISSON - GONNEVILLE ROAD for the purpose of observing enemy movements and locating any possible new dispositions for the intended fighting patrol that was to put in an attack in that area at night. Lieut. Elms had the misfortune to be hit and severely wounded when approaching the FDLs and later died."
Extract from the Northampton Mercury 28 July 1944
"A former member of Northampton Borough Police Force has been killed in Normandy. He was Lieut. Frank Elms (28) of the Commandos and his wife lives at 66 Holly Road, Northampton. She was before her marriage Miss Joan Stella Botwood, well known Northampton swimmer and diver.
Lieut. Elms joined the Police Force in Nov.1936 and left to join the RAF in Sept. 1941. He went to Canada for training but was involved in a crash and later transferred to the Commandos."
Additional Sources
CWGC.
The 1939 Register covering Northampton.
[Image 1]  Published in the Northampton Mercury 28 July 1944.
[Image 2] Frank and Joan Elms wedding photo published in the Northampton Mercury 05 September 1941.
Primary Roll of Honour:
4 Commando Roll of Honour
Photo of Commando in Gallery:
Yes
Photo of grave in Gallery:
Yes
Archive pages :
No 4 Commando