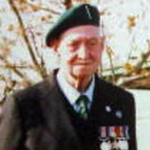 Fusilier Dudley Cooper was awarded the Military Medal in recognition of gallant and distinguished services in Italy.
He was a serving Police Officer who joined the Manchester Police on 26 March 1941 before volunteering for the Commandos as part of the Police Intakes.
Recommendation
"Fusilier Cooper was No. 1 of a PIAT in a Troop ordered to cross 1500 yds of open ground to attack enemy positions defending a bridge during Operation 'Roast' on 2 April 1945. When 300 yds from the objective, the Troop came under withering Spandau fire. Cooper, with great coolness, gave accurate support to his troop which succeeded in capturing the bridge.
Before he could rejoin the Troop, a strong counter-attack was launched during which his No. 2 was killed. Cooper, in the face of intense fire, moved his PIAT to a fire position on the flank and being without a No. 2 had to make two separate journeys across open ground to bring up bombs. There, although under automatic fire, he engaged the advancing enemy, firing at low angle and succeeded in halting them. When his bombs were exhausted he continued to engage the enemy with his Colt automatic.
When the counter-attack was finally beaten off he returned with his weapon under cover of smoke from a burning haystack to rejoin his Troop HQ. Throughout the operation he showed great initiative and personal courage."
Sources
London Gazette 37162, page 3495.
National Archives file WO 373/13/59.
Manchester Police Index 1812-1941.
Image in gallery wearing his medals including the Police Long Service and Good Conduct Medal.
Handwritten Nominal Roll of No.2 Commando provided by Mrs Desiree Roderick MBE.
Photo of Commando in Gallery:
Yes
Archive pages :
No 2 Commando