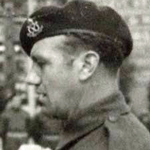 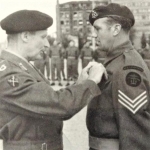 Sergeant Cyril Dobbs was awarded the Military Medal [1] for gallant and distinguished service during operations at the River Maas [2]. He also served in No. 4 Commando and participated in the Dieppe raid in 1942 [3][4].
Recommendation
Unit No.6 Commando
On the night 24/25 February 1945 Sgt. Dobbs was a member of a Fighting Patrol sent out to cross the River Maas and bring back a prisoner. Having crossed the river the Assault Party was advancing towards an enemy post when heavy accurate fire was opened from three different positions, pinning them to the ground.
Sgt Dobbs , who was in command of the Covering party, acted immediately. Exposing himself without hesitation to heavy MG fire he brought his party across the open ground at speed and opened fire on the nearest enemy post. His fire was so effective that the MG was knocked out, and he was able to dash in and take prisoner the two soldiers manning the gun.
He then engaged the other enemy posts with fire from an exposed position, thus drawing all enemy fire on to himself and allowing the Assault Party to withdraw.
Meanwhile an enemy NCO came running up to retrieve the situation, and Sgt Dobbs shot him dead at close range. He then withdrew his party to the river bank without suffering a single casualty.
From this successful patrol important enemy identifications were obtained. Its success was in great part due to the tremendous dash and initiative displayed by Sgt Dobbs [2].
Sources
[1] London Gazette 37061, page 2336.
[2] National Archives file WO373/53/898.
[3] Commando Association newsletter 114 issued March 2002.
[4] Partial Nominal Roll No.4 Commando at Dieppe.
[Image] His sons Clive & Graham Dobbs.
Linked content:
Dieppe - Operation Jubilee
Photo of Commando in Gallery:
Yes
Archive pages :
No 6 Commando
No 4 Commando