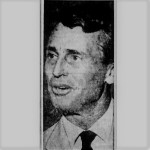 21 December 1940 commissioned Second Lieutenant, Gloucestershire Regiment [1].
Served No.12 Commando and from 30 May 1943 No.6 Commando [2] .
Temporary Major, No.6 Commando, awarded the Military Cross for gallant and distinguished service on 11 April 1945 during the assault on Essel Bridge over the River Aller [3].
Recommendation
"Near Essel on 11 April 1945 Major Leaphard's troop was ordered to take Essel Bridge. This necessitated advancing over 300 yards of wood under heavy small arms fire before reaching the bridge.
Major Leaphard led his Troop straight through the wood at the double and whenever his Troop showed signs of hesitating owing to the heavy enemy fire he exposed himself repeatedly in order to give his men further heart by his own personal example.
Encouraging and exhorting them to redoubled efforts, they reached the bridge and charging forward shouting at the tops of their voices they so demoralised the enemy that they at last broke and fled and the bridgehead was taken.
The success of this action was entirely due to Major Leaphard's leadership, personal example, and complete disregard for his personal safety. By sheer determination and fighting spirit he succeeded in overwhelming and terrorising the enemy.
After this action fifty enemy dead were counted on the ground" [3a].
Sources
[1] London Gazette 35030, page 255 .
[2] Website for No 6 Commando.
[3] London Gazette 37138, page 3232.
[3a] Award Recommendations / National Archives file WO373/54/264.
[4] London Gazette 37467, page 956.
[5] London Gazette 38596, page 2095.
[6] Account of a training accident on 21 March 1953 (4 deaths) at Sungai Besi, Selangor, Malaya, published in the Liverpool Echo 24 March 1953.
[7] Numerous newspaper articles of that period including the Daily Herald 5 July 1952.
[8] Obituaries in Commando Association newsletter 104 (March 1997).
[9] CWGC.
[Image] Daily Herald newspaper 5 July 1952.
Linked content:
LEAPHARD, Marshall John Adam
Normandy - Operation Overlord
Archive pages :
No 6 Commando
No 12 Commando