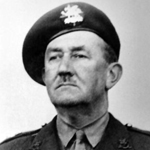 Charles Edward Vaughan, born 1893, was originally attached to No.7 and No.4 Commando before taking up his role as the Commandant of the newly formed Commando Depot (CBTC) at Achnacarry.

RSM of The Buffs (East Kent) Regiment from 1926 - 1935.
Awarded MBE (Military Division) 1934 [Source: London Gazette 34056; page 3563]
Promoted Lieutenant 22nd July 1940  [Source: London Gazette 34926; page 5081]
Awarded OBE  (Military Divsion)1946  [Source: London Gazette 37598; page 2771]
Promoted Lt Col. to take up post of Commandant at the Commando Depot 1942.
In  his book 'It had to be Tough', the author Major James Dunning says of him
" A Veteran of the First World War and the Retreat from Mons in 1914. In the inter war years he graduated from Drill Sergeant to RSM, but he was much more than just a bawling barrack square man, although he could do that if needed. His obvious military potential as an officer was recognised and he was duly commissioned."
"A Londoner by birth and proud of it, Charlie's standards for soldiers and soldiering were set by his long service in war and peace. He accepted nothing but the best, whether it be in fitness, training, weaponry and musketry, fieldcraft and tactics, drill and turnout, or even in the more apparently mundane matters of administration which included feeding and hygiene."
"Together all these factors made the 'whole' - and the self disciplined and reliant Commando soldier 'fit to fight' and 'fighting fit' with high morale, willing and capable of tackling any military task, under any circumstances, and against any odds."
Charles Vaughan was associated throughout the remainder of his life with The Old Comrades Association of the Special Service Brigade, later amended to the Old Comrades Association of the Army Commandos (The Commando Association). It was formed on the 20th June 1943 at the Commando Basic Training Centre at Achnacarry by Lt Col Vaughan, who as Founder Member was given membership Number One.  Lt Col. Vaughan was President of the Commando Association during the  years 1947/48, 1953/54/55, and 1963/64/65. He was also involved in the formation of the Commando Benevolent Fund to assist or benefit persons who have served at any time in the Army Commandos or being dependents, wives, widows or issue of such person, being in need of assistance.

On June 6th 1964 during the ceremonies in Ouistreham commemorating the 20th Anniversary of the D Day Landings, the Commando Memorial window at the church of St Sampson was unveiled by Lieut. Colonel Vaughan. The window had been donated by the Association to the people of Ouistreham as a token of appreciation for their continued hospitality and kindness to Commando Veterans attending D Day Anniversaries. In January 1965 Lieut. Colonel Charles Vaughan OBE represented the Association at the funeral service in St Paul's Cathedral for Sir Winston Churchill.

Donald Gilchrist author of 'Castle Commando' wrote :
" But it is to you, Charles, that we who counted it an honour to serve you, wish to show our appreciation. You made us fit to fight. You taught us the art of living in a world at war, and to laugh in the most perilous circumstances. What we were - if we were anything - we owe in great measure to you."

Photo of Commando in Gallery:
Yes
Archive pages :
Commando Training WW2
No 7 Commando
No 4 Commando
‹ 'Courses at CTC Inveraray' up FILM 'The Story of the Green Beret ›