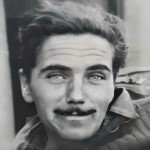 Charles Backhouse served with No.2 Commando before joining the 1st S.A.S. [1].
He received a Mention in Despatches for his escape having been taken prisoner of war whilst serving with the 1st SAS [2].
Recommendation
"Backhouse was taken prisoner on the Mareth Line, Tunisia, on 21 Jan.'43, and at the time of the Italian Armistice was Camp Leader in Camp 146/29 (Lodi). On 20 Aug.'43 Backhouse and one other walked out of camp; they were recaptured about 20 minutes later. Prisoners of War in Camp 146/29 were released by the Italians shortly after the Armistice; the men split into small groups and lived on neighbouring farms. Backhouse made arrangements with the local priest for some of the men to go to Switzerland.
Backhouse was caught by Germans on 4 Oct.'43; he was taken first to Milan and then on to Montova and shortly afterwards entrained with other Prisoners of War for Germany.
Backhouse and his companions cut a hole in the side of the truck and jumped from the train near Vicenza at 1900hrs on 6 Oct.'43. He went to the village of Montibello, where he remained for a month.
With a friend he tried to go to Yugoslavia, but on reaching the neighbourhood of Trieste they were forced to turn back on account of German and Facist patrols and the inhospitable attitude of the people. They returned to Lodi and shortly afterwards went to Agnadello. Here they got in touch with an Organisation and finally reached Switzerland on 10 Jan.'44." [3].
Sources
[1] List of No.2 Commando from Mrs Desiree Roderick MBE, Commando Benevolent Fund.
[2] London Gazette 37274, page 4685.
[3] National Archives file WO373/64/314.
[Image] His grandson James Backhouse.
Notes
There is a note mentioning Malta and then joining SAS on [1].  There was a small detachment from No.2 Commando that went to Malta as part of Force X in 1941.
Photo of Commando in Gallery:
Yes
Archive pages :
No 2 Commando
Special Air Service
Prisoners of War