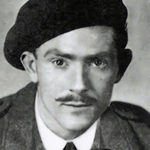 Private Alun Blackwell enlisted with the South Lancashire Regiment (Prince of Wales Volunteers) in October 1939. In 1940 he volunteered for the Independent Companies and took part in the Scissors Force expedition to Norway. He was later selected for a Special Operations Executive operation in Tunisa in 1941. He was later awarded the Distinguished Conduct Medal in recognition of gallant and distinguished service in the Field.
Recommendation
"L/Cpl. Blackwell belonged to the Malta Independent Company under the direct orders of Capt. Simpson RN commanding 10th Submarine Flotilla.
He was a picked man and had been specially trained in the handling of folbots and their use in night operations.
In Nov. 1941 he took part in a special operation for landing two agents and their equipment on the coast of Tunisia from an MTB, but the folbot in which Blackwell landed the party was wrecked and they were all arrested by local Police and interned.
When the Germans entered Tunisia in 1942 Blackwell escaped from prison and in company with the same two agents proceeded to form a secret organisation for passing information to the allied forces as to German movements and intentions.
Blackwell took over the Information side of the group and a total of 585 reports were passed to Allied HQ in the space of 4 months. The quality of the information was frequently described by the Military Intelligence Branch at AFHQ as most useful.
The group was continually harassed by German counter espionage activities, and eventually in March 1943 after 6 prominent members had been arrested, Blackwell took over leadership, and the output of information continued steadily.
Finally Blackwell was himself arrested in April 1943, despite a last desperate attempt to escape by jumping from a second storey window, but unfortunately he broke his leg, and was eventually deported to Germany.
A stout hearted North countryman who displayed courage and resource of a very high order."
Sources
London Gazette 37204, page 3962.
POW Lists / National Archives file WO392/1.
Casualty Lists / National Archive files WO/417/39; WO/417/42; WO417/69; WO417/78; WO/417/88.
Britain, Campaign, Gallantry & Long Service Medals & Awards.
Daily Telegraph obituary.
[image] Mrs Peggy Blackwell.
Photo of Commando in Gallery:
Yes
Archive pages :
No 2 Commando
Prisoners of War