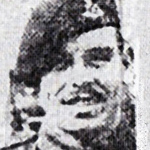 Lance Corporal Arthur Ward died during operations at Normandy, France.
Arthur served in the Wolverhampton Police Force for 3 years before the war and volunteered for the Commandos as part of one of the Police Intakes.
In 1939 he was a Police Constable residing at 74 Springfield Road, Wolverhampton.
Arthur is amongst those named on on the Police Memorial Plaque located at Wolverhampton Central Police Station, Bilston Street, Wolverhampton.
His three brothers also served in the Armed Forces, and his sister nursed in a military hospital.
Son of Edward Leslie and Elizabeth Ann Ward; husband of Kathleen Mary Ward, of Fallings Park, Staffordshire.
Sources
CWGC.
Casualty Lists / National Archives file WO417/77.
The 1939 Register covering Wolverhampton.
Image of the Police memorial held by the IWM ref. 88082.
CVA Gallery newspaper cutting.
Primary Roll of Honour:
'4 Cdo. Roll of Honour'
Photo of Commando in Gallery:
Yes
Photo of grave in Gallery:
Yes
Archive pages :
No 4 Commando