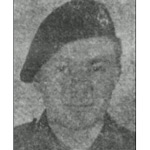 Marine Alfred Cook died during operations in Germany.
Extract from the Chelsea News and General Advertiser - Friday 13 April 1945
Marine Commando Killed On The Rhine - Sad News for Wife on Baby’s Birthday.
On the day their baby was 12 months old, Mrs Freda Cook received official notification that her husband, Marine Commando Alfred Cook, a rubber moulder employed at Lots Road, Chelsea before the war, had been killed in action on the Rhine. A few weeks ago his wife furnished a flat at Fulham Road in readiness for his return. But alas he was destined never to see it.
The couple were married two and a half years ago at St. Dionis's, Parsons Green. Marine Commando Cook, who was 22, went to Normandy on D-Day. and was wounded with shrapnel during his service there. He was among the first of the B.L.A. men to come home on leave. Only a few hours before he was killed he sent a birthday card his baby.
Cook's closest friend in his unit was also a Fulham man, Marine Commando Robert Sharp, of 311, Lewis Buildlngs, Walham Green. "I was near him when he fell and helped carry him back the dressing station."
Sharp, home on compassionate leave owing to the Illness of his father, told one of our reporters, "I got the sanction of the chaplain take his signet ring from his finger and the first thing I did when I got home was go to Mrs, Cook's home to hand It to her. Only the night before he was killed he was talking of wife and baby and saying he hoped It would not be long before he could be home with them. He was a great chap."
Sources
CWGC.
Registers of Reports of Deaths - Naval Ratings / National Archives file ADM104/129.
Chelsea News and General Advertiser via The British Newspaper Archive.
Image © Trinity Mirror. Image created courtesy of The British Library Board.
Primary Roll of Honour:
45RM Cdo. Roll of Honour
Archive pages :
45RM Commando