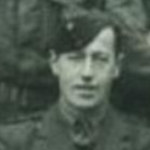 Major Alexander Ronald, Second in Command of No.6 Commando,  died during operations in North Africa [1].
Earlier he had received a Mention in Despatches for gallant and distinguished services during operations on the Lofoten Islands March 1941 with No.3 Commando [2][2a].
He was the Captain of No.3 Commando 5 Troop in December 1941 later leaving the Commando to become 2 i/c No.6 Commando [3].
He resided at Waterton House, Ampney Crucis, near Cirencester, and was employed before the war at the Stock Exchange [4]
Sources
[1] CWGC
[2] London Gazette 35172, page 3003.
[2a] Memoirs of a Fighting Commando in WW2, author Brig. J. Durnford-Slater.
[3] Photo of 3 Cdo. 5 Troop in gallery.
[4] Cheltenham Chronicle - Saturday 08 May 1943
[4] British Newspaper Archive (website britishnewspaperarchive.co.uk); The British Library Board.
Primary Roll of Honour:
6 Cdo. Roll of Honour
Photo of Commando in Gallery:
Yes
Archive pages :
No 6 Commando
No 3 Commando