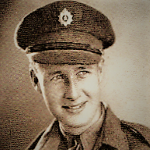 1938 joined the North Somerset Yeomanry rank Trooper.
20 February 1940 arrive in Palestine with his Regiment.
March 1940 injury to knee from horse kick.
August 1940 posted to Air Defence Operations Room at Haifa *.
5 January 1941 posted back to North Somerset Yeomanry.
4 February 1941 volunteeered for and posted to Middle East Commando Depot at Geneifa.
14 April 1941 completed training joining 52 Middle East Commando.
May 1941 embarked for Crete as part of Layforce.
2 June 1941 reported missing during operations in Crete, later found to be a prisoner of war.
Post war member of the Commando Association and member of the Middle East Commando Historical Research Group (MECHRG).
Sources
The book 'Thanks for the Memories', author  (Alfred) Leighton Bowen
Casualty Lists / National Archives files WO417/27, WO417/30, rank and unit corrected in WO417/56.
Prisoners of war / National Archives file WO392/1 (Stalag 8B).
Commando Association Lost Legion 11 dated 1977.
Commando Association newsletter 75 issued 1982.
Report in the Monmouthshire Beacon 7 April 2011.
Government Probate Death Index for Glamorganshire.
Notes
* Amendment in Casualty Record WO417/56 show unit as Royal Corps of Signals, rank Signalman. Leighton does not mention this which may have occurred on records during his posting to the A.D.O.R. at Haifa.
Linked content:
'Rearguard action on Crete'
Archive pages :
52ME Commando
Layforce
Prisoners of War