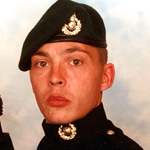 Marine Scott Summers died in a traffic accident that occurred on the 4th February after he had volunteered to drive in a routine convoy in Helmand province. He received initial treatment in Afghanistan before being transported back to a specialist unit in the UK where he died on the 21st February.  He joined the Royal Marines in January 2005 and deployed to Afghanistan in October 2006, and had been driving a Pinzgauer vehicle when the accident happened. [Source: MOD].